Originally I had thought about just taking 1 exam (70-417) which would have allowed me to upgrade from 2008 to 2012 R2 however as I read through the requirements as well as testimonials online it soon became clear to me that this would be a much more difficult route to undertake.

I was fortunate enough that I was able to secure funding from my employer (VMware) through their Take 1 program to pay for these exams so it was a win win situation and I had nothing to lose here.

When I applied for that funding I stated that I would take all 3 exams in Q1 2017 however due to an unexpected increase in workload this plan had to be amended and deferred until later in the year to the point that I took 70-412 at the beginning of December.

I sat the 1st exam 70-410 at the end of August, this would focus on Installing and Configuring Windows Server 2012.  Of the 3 exams I found this the easiest and as a result achieved a high pass mark.  According to the score report my strongest area was “Create and Manage Group Policy“.

The 2nd exam 70-411 came soon after in September and this would focus on Administering Windows Server 2012, this was a harder exam as it would cover areas which I most likely would never come across in my day job but you still needed to know it.  Again for some reason my strongest area was “Configure and Manage Group Policy“.

I took some more time to study for 70-412 which covered Configuring Advanced Windows Server 2012 Services and as a result I did not take this until early December.

Of the 3 exams this was the hardest and meant it produced my lowest pass mark but I was just glad to see that I had passed once I clicked finish on the exam.  My strongest area here according to the score report was “Configure and Manage High Availability“.

So after around 3 months of study and passing 3 exams I could finally say that I was a Microsoft Certified Solutions Associate on Windows Server 2012 R2 hence the choice of GIF in my tweet above and a few days later my Acclaim badge was released. 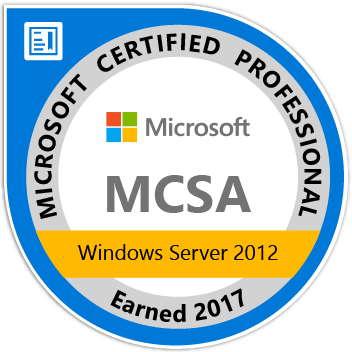 Now that I have my MCSA on Windows Server 2012 and with the changes in the way Microsoft is measuring success, I only have to take 1 more exam now to upgrade my MCSA to an MCSE or Microsoft Certified Solutions Expert.  At this time I am likely to go down the MCSE: Cloud Platform and Infrastructure path and take 70-414 which covers Implementing an Advanced Server Infrastructure but this plan may change.

This is the current goal for Q1 2018 but for now I am taking some time out to rest my brain, enjoy the Holiday season and also to study for the VCAP6-DCV Deploy exam.

Thanks for reading and please feel free to leave a comment or message me on twitter (@lukaswinn) if you found this article useful.