Last Friday was a highly anticipated day for the VMware Community as we would finally find out who was going to be awarded vExpert 2018 and be recognized among our peers. Originally the announcement was due near the end of February but more time was required this year to judge applications so it was postponed until March.

Personally for me this announcement was important as I finally took the plunge last year to apply for vExpert 2017 as I felt I had significant contributions although these were predominately internally and on twitter.  Regardless I applied and was duly awarded which although was a bit surprising I was still very grateful.    Soon after this, I made a personal goal to start my blogging journey known as lukaswinn.net and contribute more to the VMware community externally as well as continue the existing work I was doing internally at VMware.

If I look back to December 2017 when I was filling out my vExpert application for 2018 I started to realize that 2017 was a big year for me as I not only had written several VMware specific blog posts but had also hosted round table sessions at VMworld in Barcelona. This to me was sufficient criteria and significant enough contributions in 2017 to warrant me applying for vExpert 2018 and being in again with a good chance of success.

As last Friday progressed I was scanning the vExpert Slack Workspace and the tension was palpable as each hour went by and people would be commenting in the #vexpert channel about the impending announcement and then just before midnight GMT I started to see a flurry of posts with people receiving e-mails.

Unlike previous years where the result would be issued via a Blog post, for 2018 the announcement was done via e-mail.  After a few minutes I finally received the e-mail that I was waiting for with just 2 words that stood out…YOU’RE IN! 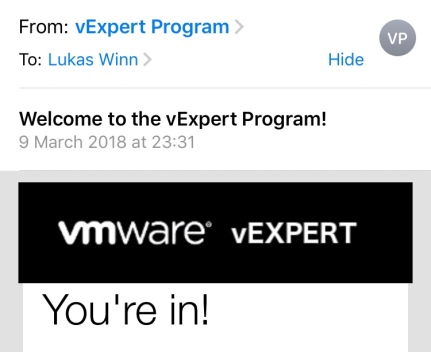 My goal for 2018 is to continue blogging and hopefully speak more at VMUGs, in addition I have also submitted a few sessions for VMworld 2018 and will continue to interact and contribute to the wider VMware community.

Thanks for reading and please feel free to leave a comment or message me on twitter (@lukaswinn) if you found this article useful.